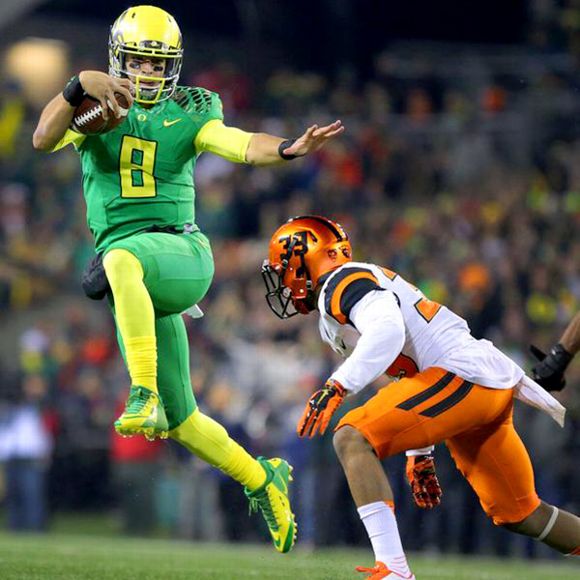 Why did this image (above) by Brian Davies “go viral”? Chris Pietsch, a multimedia journalist at the Register Guard, our local paper in Eugene, Ore. asked me just that question. I have to admit, I hadn’t given it much thought. I had watched the game and seen the photo, of course. I think I saw it when Brian posted it on Twitter. It seemed it was everywhere.

Chris was creating a multimedia piece for the RG and needed the “expert” view. Apparently, I’m the expert. As you know, I love doing interviews and I enjoy Duck Football, so of course I said yes.

So why did it “go viral”? It was a bit of a perfect storm of variables, I think. Congrats to Brian on recognition of his work and to Chris for helping to tell this story.

Morning Mantras & the Importance of Consistency and Authenticity

Hi Kelli, nice interview and good points you make here. I’d like to suggest one more point: the business side.

The RG has obviously embraced the inevitability of the web and social media rather than fighting it. The RG holds the copyright to the image, but allows their photog to post socially and other entities to use the image with the idea that RG advertisers may benefit from enhanced website traffic. We see Spain and Germany fighting this model in legislative and court actions, and there are other countries taking a similar stance.

It’s nice to see the RG continuing the progressive stance they held since I was in J-school and watched the RG soar during the Brian Lanker days.

I like to take an even bigger back and ask why a football game attracts so many viewers. I mean, millions of people watch football games each week, but why is the football narrative so compelling. The answer is simple: it is due to stakes. Without stakes, there is no reason for the viewer to care. Stakes are created because one team has to win and one team has to lose.